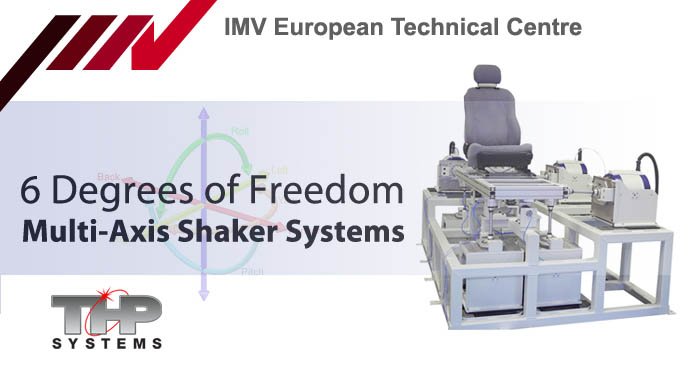 IMV Corporation and THP Systems are announced completion of the pre-acceptance test of a 6DOF (Six Degree of Freedom) Simultaneous Squeak and Rattle Test System for a major Automotive Component and System manufacturer.

The System from IMV will be used to test a wide range of Automotive interior parts, from components up to full Instrument panels and seat assemblies.
The 6DOF System features 8 off ED Shakers that can be controlled either individually or simultaneously.

The system has been specifically designed to allow the customer to test both durability and Squeak and Rattle profiles.

These profiles are either specified by the OEM or are real life waveforms that have been recorded within the final completed vehicle, these signals will be replayed through the System to generate a real world test scenario.

The system achieved an accurate reproduction of the real measured data to better than 10% while testing the customer’s products.  The customer will also be performing tests in either single or simultaneous axis without the need to re configure the ED Shakers.

The 6DOF System has also been designed to test not only at noise levels, well within the latest automotive specifications (typically less than 35 Dba), but also has the  additional capability to run long term durability profiles(to simulate 150,000 miles of vehicle usage).
The system has a customer payload capability of 250kg.