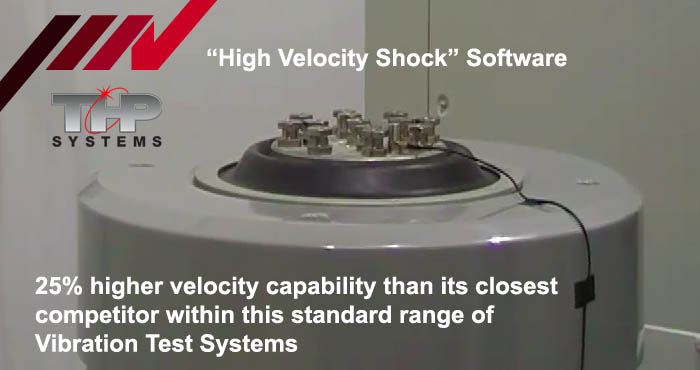 Recently the Automotive sector has demanded that more Shock Testing should be performed on Components and Sub Systems, the main specification for these tests is recognised as 100g - 11ms.

When IMV Corporation developed their I, J and K Series Test Systems, they considered the future increasing requirements in Shock Testing and therefore developed these shaker systems with up to 25% higher velocity capability than its closest competitor within this standard range of Vibration Test Systems.

As an added benefit for customers, IMV were advanced in terms of providing standard Vibrators with displacements in excess of 100mm and these have already been established in the market for over 5 years.

The subsequent development of the ISM (Integrated Shaker Manager) software enabled IMV to have greater control over the performance of the shaker Test System.
The ISM software has the ability to automatically adjust the operating condition of the shaker (field current) to increase the shock velocity capability of a standard system.
This has allowed the shock velocity rating of a standard system to be increased from typically 2.2m/s to 3.5m/s.
The big advantage is to offer a smaller system, but with a big shock capability, reducing both investment costs and running costs.
The additional advantage is to maintain a direct-coupled system (no matching transformer) which brings significant benefits in maximising the available displacement from the shaker.
Essential for high shock test capability.

IMV have announced a further expansion of our ECO range of Electro-dynamic test Solutions by offering customers with existing Vibration equipment the opportunity to upgrade their test systems. More